The Iguanas were a hard luck hockey outfit that slugged it out in the River City for the better part of a decade. The team’s off-ice competition proved even more formidable than their Central Hockey League rivals and ultimately drove the Iguanas out of business on two separate occasions. 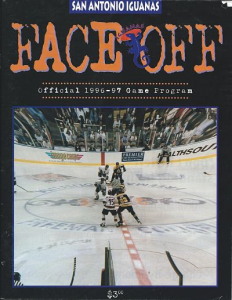 The Iguanas first set up shop at the Freeman Coliseum in the fall of 1994. San Antonio was the first expansion franchise to come online in the Central Hockey League, a single entity low-level circuit that began play two years earlier in 1992.

The original coach of the Iguanas was former NHL star Bill Goldsworthy. The former Minnesota North Stars stalwart, then 50 years old, was in poor health as training camp got under way. During a road trip in Tennessee two weeks into the Iguanas first season, Jim Riggs, the General Manager of the opposing Memphis River Kings, noticed that Goldsworthy looked unwell. He was hospitalized in Memphis with blood clots in his lungs and pneumonia. Placed into intensive care, Goldsworthy soon got even more dire news: he had tested positive for AIDS. He never returned to coaching and passed away 16 months later at the age of 51.

30-year old John Torchetti took over the team from Goldsworthy. And the Iguanas were off to the races. San Antonio advanced through the playoffs to the Levins Cup Final under Torchetti in each of their first two seasons, losing to the Wichita Thunder in 1995 and the Oklahoma City Blazers in 1996.

Brian Shantz led the league in scoring in 1995 and 1996 and won the CHL’s Most Valuable Player award in 1996. Shantz’s teammate Paul Jackson earned the league MVP award for the 1994-95 campaign.

Overall the Iguanas posted winning records in sixth of their seven seasons of play. They would never return to the Finals after their first two excellent seasons, however.

San Antonio is a big market. And the CHL brand of hockey was … just alright. So it’s not surprising that the city would draw the eye of more ambitious leagues and wealthier investors. Ultimately, the story of the Iguanas belonged on the business pages rather than the sports section, defined by a pair of David vs. Goliath contests over the San Antonio market.

Before the Iguanas’ third season in the winter of 1996-97, the owner of the Peoria Rivermen of the International Hockey League moved his franchise to San Antonio. Renamed the San Antonio Dragons, the IHL club secured a lease in the very same building as the Iguanas. The 50-year old Freeman Coliseum would host 74 hockey games that winter, 33 for the Iguanas and 41 for the Dragons.

It was an unfortunate year for the Iguanas to have their worst season, a 26-36 last place campaign. The Dragons, playing in the higher quality IHL, a league with both top prospects on the way up and grey-haired former NHL All-Stars playing out their final years, won a division championship. Crowded out by the bigger budget Dragons, Iguanas attendance plummeted 50%.

The Iguanas lost a court battle over the Freeman Coliseum lease and closed down following the 1996-97 season. But the Dragons, given the San Antonio market all to themselves for the 1997-98 season, squandered the opportunity. After losing $7 million over two IHL seasons from 1996 to 19983 the Dragons’ owners were desperate to get out. They turned the IHL franchise over to Horn Chen, the Iguanas’ secretive original owner and majority backer of the CHL itself.

In a swift sequence of moves during the summer of 1998, Chen changed the name of the former Dragons club back to the Iguanas, dropped the team from the IHL back into his own Central Hockey League, and sold 90% interest in the new Iguanas to David Elmore, a fellow serial sports investor and owner of San Antonio’s minor league baseball team, the Missions.

The Iguanas played on for four more seasons. 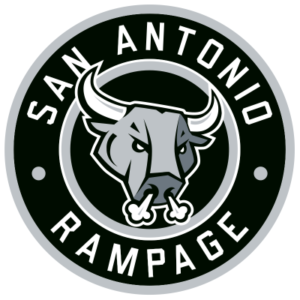 The Rampage would serve as the top farm team for the NHL’s Florida Panthers. John Torchetti, the man who guided the Iguanas to back-to-back CHL finals appearances in 1995 and 1996, signed on as the Rampage’s first head coach.

Bowing to the inevitable the Iguanas closed up shop for good in June 2002.

Former Iguanas head coach John Torchetti later became the interim head coach of no less than three NHL teams: the Florida Panthers (2003-04 season), the Los Angeles Kings (2005-06) and the Minnesota Wild (2015-16). He has never held an NHL head job on a full-season basis.

This is a list of all the players that played for the San Antonio Iguanas, a hockey team playing in the Central Hockey League from 1994 to 1997. This list is accurate for most teams, but for some obscure teams the list may be partial. We have found 75 players.
Copyright (c) 2021 San Antonio Iguanas
Designed by: